Amplifying the Voices of NGOs: Introducing the Civil Society Umbrella Groups in Vienna 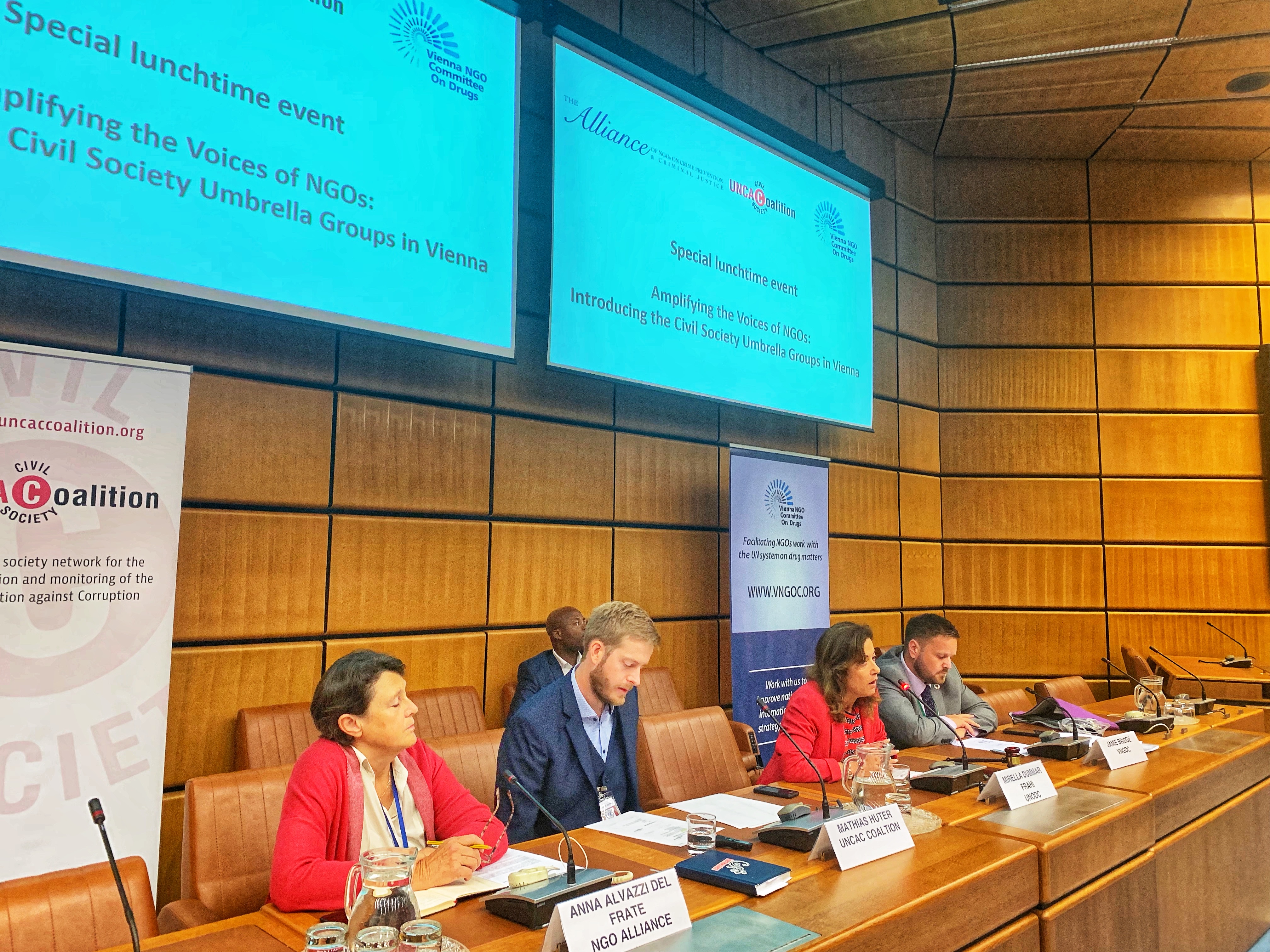 On September 23rd 2019 the VNGOC together with the UNCAC Coalition and the Alliance of NGOs on Crime Prevention and Criminal Justice  held a welcome briefing open to all government missions, UN colleagues, civil society partners and other stakeholders – but was especially aimed at those who have recently arrived in Vienna over the summer.

The three  prominent civil society umbrella groups – the Alliance of NGOs on Crime Prevention and Criminal Justice, the UNCAC Coalition, and the Vienna NGO Committee on Drugs (VNGOC) – presented their respective mandates and work, and how they contribute to the debates and discussions in Vienna.

The event came at an important time across the various mandates in Vienna – with the forthcoming UN Congress on Crime Prevention and Criminal Justice in 2020, the upcoming Conference of the States Parties (COSP) to the UN Convention against Corruption (UNCAC) in December and a UN General Assembly Special Session (UNGASS) on corruption scheduled for 2021, as well as a new multi-year work plan for the UN Commission on Narcotic Drugs from 2019 to 2023. The aim of the meeting was to introduce the three civil society networks, describe the work they do, and outline the value they bring to the work being done in Vienna. The programme included:

The UNCAC Coalition
https://uncaccoalition.org/
The UNCAC Coalition is a global network of over 350 civil society organisations in over 100 countries, committed to promoting the ratification, implementation and monitoring of the UN Convention against Corruption (UNCAC). Established in August 2006, it mobilises civil society action for the UNCAC at international, regional and national levels.
info@uncaccoalition.org

The Alliance of NGOs on Crime Prevention and Criminal Justice (the Alliance)
https://cpcjalliance.org/
Established in 1972, the Alliance represents around 50 members that work on a broad range of issues, from the treatment of prisoners, restorative justice, trafficking in persons and arms, violence against women to human rights law. The Alliance brings together non-governmental organisations engaged in research, teaching, practice, advocacy and reform in the fields of crime prevention and criminal justice.prevention@cpcjalliance.org

Vienna NGO Committee on Drugs (VNGOC)
http://vngoc.org/
Established in 1983, the VNGOC provides a link between non-governmental organisations and the Vienna-based agencies involved in setting drug policy: the UN Commission on Narcotic Drugs (CND), the International Narcotics Control Board (INCB), and the United Nations Office on Drugs and Crime (UNODC). The Committee comprises around 200 members from around the world.
info@vngoc.org